Technologies developed in a national CSR award-winning watershed project in India have helped over 20,000 farmers in southern India conserve 200,000 m3 of water and earn higher incomes through alternate livelihood options. The project has a scale-out potential of more than 45 million ha in rainfed regions and can double incomes of more than 70 million farmers in India using a holistic and sustainable model. The approach works across agriculture-for-development value chains and was tested in some of the most challenging environments.

Andhra Pradesh’s Rayalaseema region is no stranger to frequent spells of drought and erratic rainfall that hamper crop productivity and degrade land. Inconsistent incomes cause farmers to struggle, which is magnified by market shocks resulting from fluctuating prices. Additionally, workforce shortage plagues most farms as skilled farm workers migrate to cities for other means of livelihood.
Realizing the plight of smallholder farmers in the region, Power Grid Corporation of India (POWERGRID) supported ICRISAT to improve productivity and livelihoods in a watershed in Kurnool district of the state. The joint endeavor resulted in a model worthy of emulation.
The watershed is located in Bethamcherla mandal/block and comprises four revenue villages viz. Pendekal, Muddavaram, Emboy and Bugganipalli. It is home to around 20,000 people (4100 households) with most households (71%) being small farmers, 20% medium farmers and remaining 9% large farmers. The average annual rainfall in the watershed area is about 675 mm. Out of a total geographical area of about 6500 ha, around 3000 ha is cultivated. The productivity of the watershed villages’ chief crops – maize, groundnut, pigeonpea and sorghum – is low.

Increasing rainwater storage reduces yield losses
Rainwater conservation in the POWERGRID-ICRISAT watershed has generated an additional water storage capacity of more than 200,000 m3 (Figure 1a). Smallholders were able to plug yield losses by 30-60% thanks to 150 small farm-ponds that improved water access. Smallholder’s ability to invest in intensification and diversification, vegetable cultivation and planting fruit plants in marginal lands increased. In turn, the system productivity and profitability rose. Before the watershed, farmers were able to have only one harvest season. Now, they harvest twice in a year.

For the project’s efforts, the President of India awarded the POWERGRID-ICRISAT watershed projects in Kurnool, Andhra Pradesh, and in Vijayapura, Karnataka, the National CSR award for exemplary work towards integrated water management and community development. 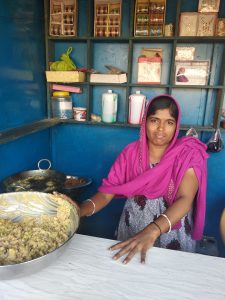 A beneficiary from the project has set up her own store to sell stationary and snacks.

Water harvesting structures prove cost effective
The low cost of investments in masonry work in ponds helped benefit maximum number of farmers. Apart from the farm ponds, big community ponds and other water harvesting structures proved effective in increasing water availability and irrigation area by around 25%. The farmers not only increased productivity, but also increased area under high value crops.

Tank rejuvenation shows small efforts can yield big
In Veeraiapalli village, a percolation tank having 58,700 m3 capacity was rejuvenated by creating bunds of 144 m length. This has resulted in 5.8 ha water spread with an average depth of 1 m. As many as 1200 Gliricidia plants have been planted in the periphery to help protect the bunds.
This intervention has brought respite to farmers of Veeraiapalli and neighboring Repalli village, especially in times of drought. Now, the water is retained in the area and provides drinking water for a large livestock population of over 1000 animals in these villages.
That apart, before the bunds and stone pitching works, water retention was minimal and surface run off was high. Ever since the intervention, farmers from the two villages are able to use water from the tank for spraying mango saplings during critical growth stages and for other rainfed crops like pigeonpea.

Holistic scaling-out through an integrated approach

The diagnosis of widespread micronutrient deficiencies in farmers’ fields (Figure 1) warranted need-based inputs that resulted in improvements of 10-50%. Similarly, productivity was improved with improved crop varieties. With better water and soil resources, farmers, including women, were able to improve livelihoods through activities like fodder promotion and livestock related activities, kitchen gardens for household nutrition and other income generation activities. The integrated and holistic solutions adopted make the watershed a scalable site for doubling incomes. Learnings from the project need to be scaled-out to other parts of drylands to benefit smallholders.

Click here to view the impacts of the watershed.