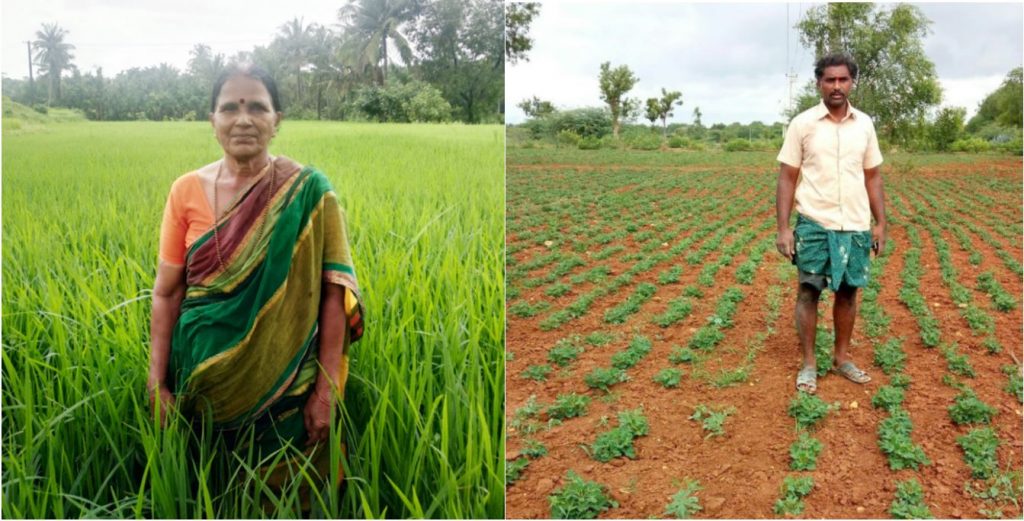 Farmer Anji Reddy had no idea what mulching or covering the soil surface could do. When he attempted it, he was pleasantly surprised to see reduced weed growth. The icing on the cake, however, proved to be the 33% yield increase he saw in capsicum crop. The jump in yield helped him net ` 40,000 more even as he saved ` 15,000 that would have been needed for weed removal. He is one of the farmers in the Bhoosamrudhi Project.
“I planted capsicum on 0.8 hectares (2 acres) in 2019. I was advised by the Bhoosamrudhi-ICRISAT staff to mulch the topsoil with plastic. It did wonders! I harvested 3 tons. Earlier, yields wouldn’t exceed 2 tons,” Mr Reddy, a smallholder farmer in Rajgira village in Karnataka’s Bidar district, beamingly said.

Bhoosamrudhi – how it came to be and its focus areas

Fifty-six percent of Karnataka’s population depends on agriculture for livelihood. Many of the state’s farmers toil in drought-prone areas with sporadic patches of irrigated areas. A large portion of agricultural land in the state is exposed to vagaries of monsoon and severe agro-climatic and resource constraints.
These factors led Government of Karnataka’s Department of Agriculture (DoA) to adopt science-led initiatives for achieving impactful development in the state. The Bhoosamrudhi project was coordinated by ICRISAT and executed by a consortium of six CGIAR centers, NARS partners and line departments of the state government across eight districts in Karnataka from 2013 to 2019.
The focus areas of the project have been – use of efficient land management technologies, improved cultivars and improved livestock management practices. These include solar pest traps, weedicide, fungicides, seed dibbling-nipping, fruits and vegetable cultivation promotion, use of drones for mapping and impact assessment, land and water management interventions such as Laser Land Leveling, Broad Bed & Furrow (BBF), Direct Seeded Rice and humic acid – micronutrients, trash shredding, intercrop in sugarcane and tomato, bud chipper, cultivation in rice fallows and more. 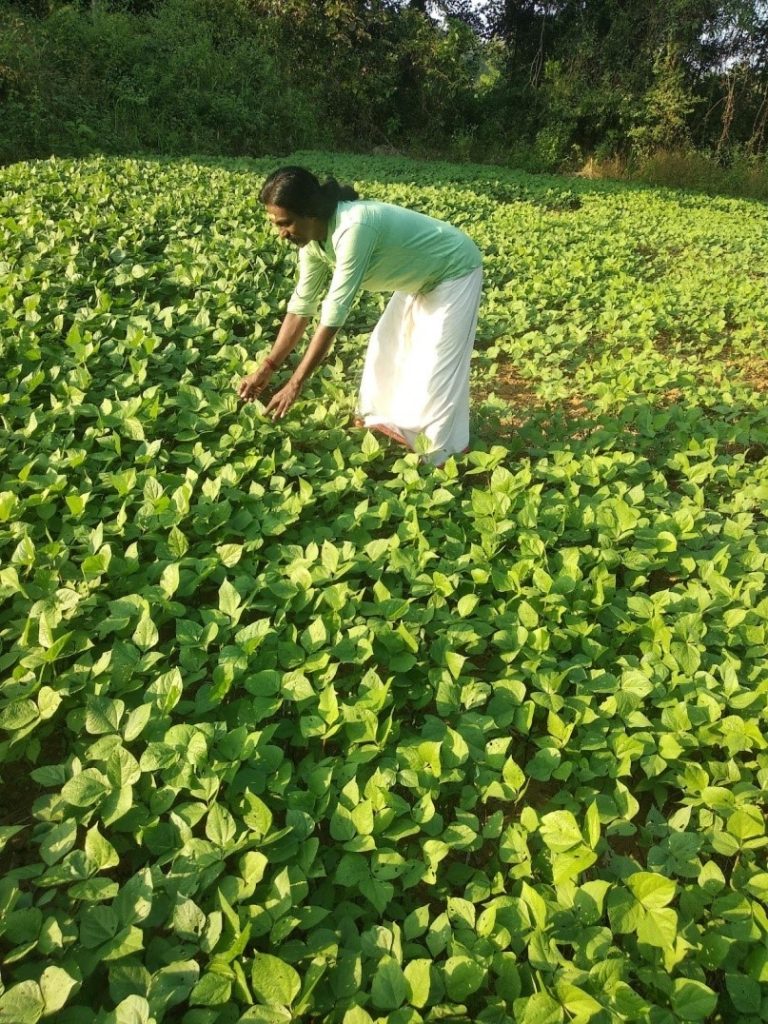 When used in conservation agricultural practices and in dryland areas, zero-tillage results in high yields and reduced per hectare production cost compared to conventional tillage. Zero-tillage follows three principles: (a) continuous no-till, leaving high stubble standing (also creating soil health conditions that in medium to long term defeat weeds) (b) permanent soil cover (c) crop rotation. Zero-tillage is known to enhance optimal soil biological, chemical and physical features (including moisture retention).
With the seed cum fertilizer drill machine, Mr Krishna could grow a second crop without tilling the land that in turn resulted in better use of available soil moisture. He harvested 500 kg of both the crops.
“Earlier, with the conventional practices I could harvest only 300 kg in both these crops. Before Bhoosamrudhi, I made no profits from the gram crops. I only cultivated them for increasing soil organic matter, household consumption and to prepare land for next paddy season,” he informed.
The extra produce helped him net ` 12,000 and ` 20,000 from black gram and green gram, respectively. Besides enriching soil, improved practices have helped the farmer earn extra income.
Mr Shivananda from Iduguru village in Chikkaballapura district has seen water run off his fields. Yields in groundnut and other dryland crops were low until the Bhoosamrudhi project. 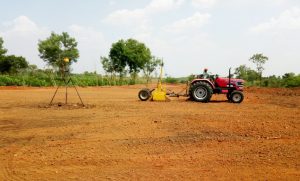 The project’s staff from ICRISAT and CIMMYT noticed that his land was undulated and needed leveling. Laser Land Leveling is a process of leveling slopping land using a guided laser beam throughout the field. After explaining the benefits of laser land leveling that was being taken up under the project, the farmer gave the go ahead. He was also given the groundnut variety ICGV 91114 that he sowed in 1 ha of land.
“My field retains more water now. I received a yield of 650 kg in 0.40 ha (1 acre) against 500 kg during drought years that local varieties give,” the farmer said. He added that the cost of cultivation reduced from ` 8000 to ` 3000, mainly owing to reduced labor requirement.
The Indian Institute of Horticultural Research (IIHR) and ICRISAT also gave Mr Shivananda Tuberose and China aster seeds free of cost. “I decided to take up floriculture in 0.20 ha (0.5 acre) of land. With China aster, I netted a profit of ` 40,000 after spending ` 25,000 on cultivation,” the farmer said. He is starting to get the first yield of tuberose and is optimistic of high earnings from it. Another farmer from the same village, Mr Hari Prakash, has a similar tale to narrate. During 2018-19, he incurred a steep cost on cultivation of groundnut. The yield was only 500-600 kg per 0.40 ha (1 acre). “The Bhoosamrudhi staff noticed issues with my land and recommended that I level it. They suggested laser land leveling,” he said. After levelling, he was also given ICGV 91114 groundnut. “I received 2000 kg per ha. My field earlier could only yield 1200 to 1500 kg. Also, labor costs, after levelling and use of improved variety, were only ` 6000 per ha (against ` 12,000 earlier),” Mr Prakash said. 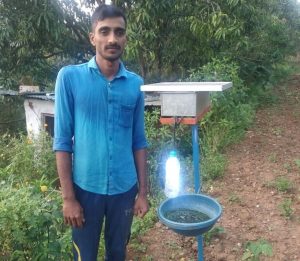 Mr Manjunath Siddalingappa from Kogilageri village grows vegetable and fruit in 1 ha of land. He grows brinjal, tomato, chilies etc. and fruits mango, guava etc. Pests were his bugbear and would set him back by ` 9000/per hectare in pesticides every year.
Through the Bhoosamrudhi project, he received a solar light trap free of cost. The light trap is a LED based electro-mechanical device that emits a light of specific wavelength to attract adult insects to the trap. The device runs on sunlight. This has helped Mr Siddalingappa reduce pesticide expense by ` 6000 and keep his farm pest-free.
Around 25 farmers in Dharwad have received these traps under the project and have benefited in the same way as Mr Siddalingappa. They have managed to reduced incidence of pest attacks and are easily able to save at least ` 5000 per year per ha by way of reduced pesticide use.

Mr Basavaraj from Chandanamathi village in Dharwad district has about 6 ha of land and usually grows safflower, black gram, soybean and groundnut along with some fodder crops. “When I noticed that my soil fertility was reducing, I approached ICRISAT and the Department of Agriculture. I was advised to try Madhyam culture. They helped me dig a 20 feet pit and trained me to make compost,” the farmer said. Mr Basavaraj received about 15 tractor loads of compost and used it in his field. He saw great success with GPBD 4 groundnut variety after applying the compost. “I harvested about 3000 kg from 0.80 ha (2 acres). Earlier, I could harvest only 2500 kg. I incurred ` 60,000 for cultivating 2 acres and made ` 90,000,” he said. PBNS 12 safflower, an improved variety, was given to the farmer. He sowed it in 0.80 ha (2 acres). “My safflower yield increased to 1500 kg with the improved variety while the local variety would yield about 1000 kg. I made a profit of ` 20,000,” the farmer explained. He also received 35 kg of safflower cake for every 60 kg bag of harvest after the oil was pressed. He used these cakes along with green fodder to feed milch buffaloes. “To my surprise, the fat content in the milk had increased. The animals were yielding 30 liters per day. The extra fat helped me earn ` 3 more per liter. This translates to a monthly profit of ` 3000,” the farmer said.

A new way of growing paddy proves remunerative and economical