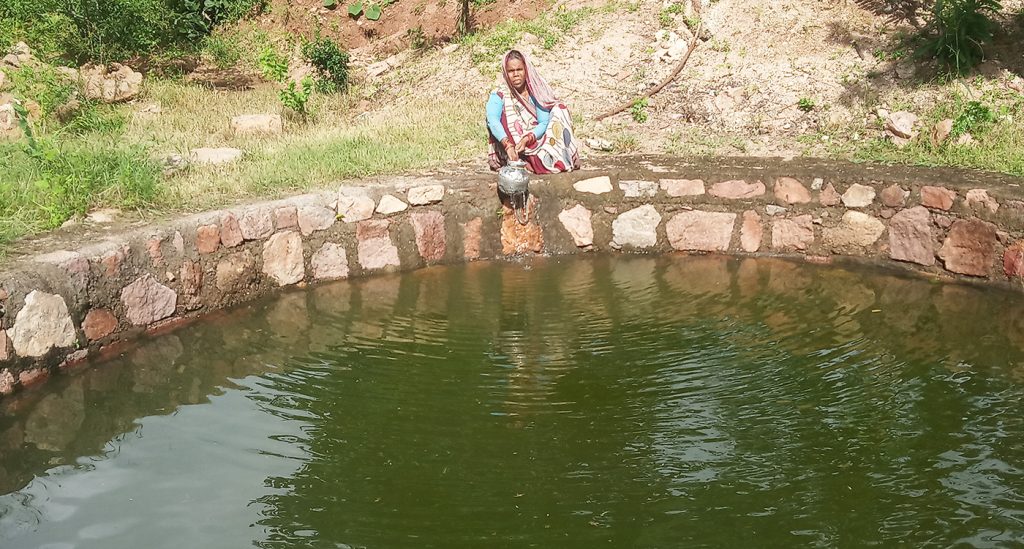 A woman collects water from a well that was recharged due to water harvesting in Lalitpur district of Bundelkhand.

Migration is making a U-turn out of Bundelkhand region in India where a project is underway to double farmers’ incomes. Water harvesting efforts initiated earlier this year have helped families in a remote village return to their homes and farms after decades of migration.

As a part of the Doubling Farmers Income Project in Poora Birdha village, an 800-meter long channel and havelis (tanks) were built to tap rains. Subsequently, farmers, who earlier had abandoned agriculture for want of water, returned to till their lands this kharif season (monsoon June–September). Encouraged by increased water availability, farmers like Yajuthi cultivated groundnut, sesame, lemon and rice on small land patches for the first time.

“I returned to farming after migrating for work many years ago. I have been able to live with my family since my return and resume farming my land with the water made available,” the farmer told a team of ICRISAT scientists and officials visiting the region. The visit was organized by ICRISAT Development Center (IDC), which is partnering with the government of Uttar Pradesh State, ICAR-Central Agroforestry Research Institute (CAFRI) and non-governmental organizations to execute the project.

Inadequate rainfall in drought years, compounded by water runoff and flooding of fields during other years, deterred farmers from agriculture during kharif in Bundelkhand. After the harvesting structures were made, water is being drained away from the uplands and made available for irrigation and groundwater recharge in the valleys. Agroforestry initiatives, alongside promoting improved crop varieties and agronomy, are helping the region’s farmers vest faith in rainfed farming.

“I used to work for other farmers far away from home but decided to return to my farm when I saw water available. My family is happy that we are farming our land, which was left fallow until monsoon this year,” another Birdha farmer Nannu said.

Farmer Bahadur narrates a similar story. After nearly a decade of leaving his land fallow and settling for work with inadequate pay, he returned to farming on the heels of the project. He has harvested 1,200 kilos of groundnut, and over 100 kilos of a mix of crops including black gram, mung bean and sesame from this year’s kharif cultivation. Assured of water availability, Bahadur’s land is being readied for the second crop season.