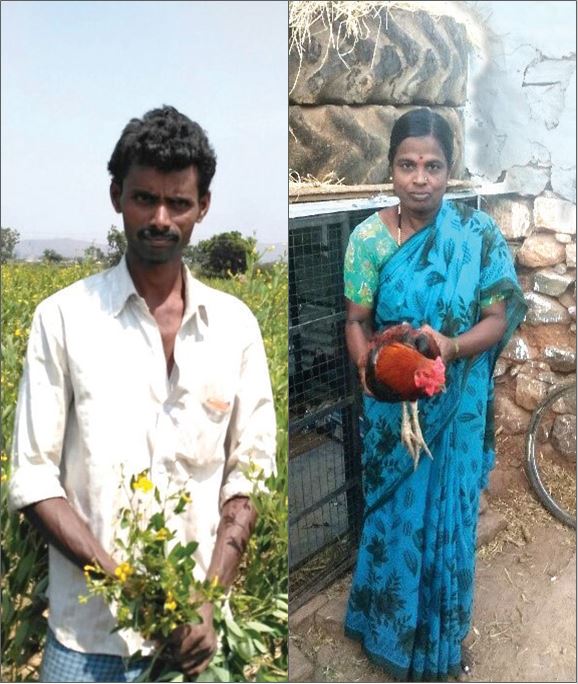 Water shortage forced farmer Thimappa to abandon agriculture and work a labor-intensive job in an industrial production unit to provide for his family. Two years after he quit farming, a JSW-ICRISAT watershed project helped him return to it.Chikantapur village in Ballari district of India’s Karnataka State is semi-arid with mean annual rainfall not exceeding 500 mm. The village relies on rainfall and ground water for agriculture. Mr Thimappa worked his 2.8 ha land for many years but the income from his farm was insufficient and varied significantly, depending on rainfall. He left his land fallow and took up the factory job earning ` 6,000 (less than USD 100) a month. After initiation of the project ‘Improving Rural Livelihoods through Integrated Watershed Management in Ballari’, Mr Thimappa was directed by a local NGO and ICRISAT to dig a farm pond in his field. A check dam was also built nearby. These interventions helped recharge groundwater and facilitated the installation of two borewells on the farmer’s field. Subsequently, he took up farming full-time and expanded agricultural activity by taking 2.40 ha on lease. The project ensured water availability even in drought years. Mr Thimappa now grows chilies on 1.20 ha and earns a net income of ` 1,50,000 (USD 2000). From another 1.20 ha, he harvests 3 tons of maize and earns ` 20,000 (USD 285). Cotton and pigeonpea earned Mr Thimappa ` 60,000 (USD 860). With increased water availability, he has been able to allocate 0.40 ha for growing vegetables.“Eggs from country birds are highly nutritious and are produced organically through natural feeds. These attributes of the eggs earn a premium,” she said. Mr Honurappa, a Joga farmer, not only improved the yield from his irrigated land but also put wasteland to use. Nine check dams and two nala bunds were constructed as part of the watershed initiative. Mr Honurappa then dug a farm pond, ensuring ground water availability well into summer.

Mrs Sharada from Joga village helps her husband, a dryland farmer, on the farm. She is also a member of a women’s self-help group called Vaishnavi. Under the JSW-ICRISAT initiative, members of the group ventured into a small-scale poultry business. Alongside 10 other members, Sharada received 10 chicks of Giriraja, a country hen breed. Members of the group were also provided financial support to build poultry units in their houses and to buy more local bird breeds.The venture turned profitable for Sharada when she began selling eggs for ` 15 each. Despite her price being thrice the market retail price, Sharada managed to build a loyal customer base. She says growing health consciousness in the region is driving the demand for eggs of country birds.Mr Honurappa began using micronutrients including zinc sulfate, gypsum and borax. The brinjal yield on his farm jumped to 2.5 ton. As many as 400 saplings of KPM Drumstick variety distributed free were grown on 0.30 ha of wasteland. In four months, the farmer started selling the vegetable to profit ` 28,000 (USD 400) from his wasteland.

Impact across crops in Doddanthapura 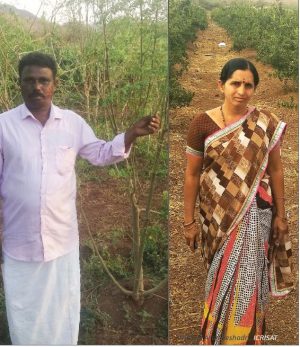 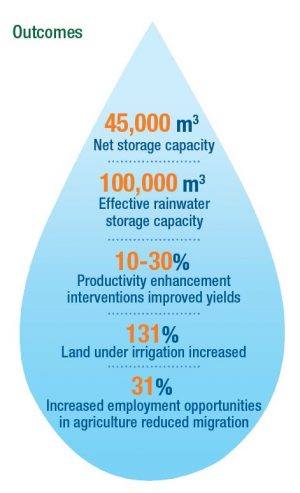 Though versatile in his crop choices, water shortage undercut Doddanthapura farmer Basappa’s income owing to the use of just 60% of the land. After initiation of watershed activities in the village, Basappa dug a farm pond which, aided by the checkdam built as part of the project, brought water to his borewell. He was also advised to use micronutrients after soil testing revealed deficiencies.Soon, groundwater level increased after a check dam, nala bund and farm pond were constructed. Emboldened by the water supply, Mokshamma decided to take a big plunge into agriculture. She took out a loan of ` 30 lakh to cultivate pomegranate. Her first harvest after reviving the land saw her reap 10 tons per 0.40 ha. Now, three years later, Mokshamma has repaid her debt and is looking forward to profit from her farm. Mr Basappa now grows chilies, cotton and groundnut. Groundnut yield jumped to 1.4 ton per 0.40 ha from about 1 ton earlier. His income from cotton saw a 25% increase owing to a commensurate yield rise. Chilies yield registered a similar increase.

For years, Mrs Mokshamma’s 5.2 ha farmland in Kodalu village was left barren due to non-availability of water. Profiting from the wasteland was not the farmer’s priority until the JSW-ICRISAT watershed project began.