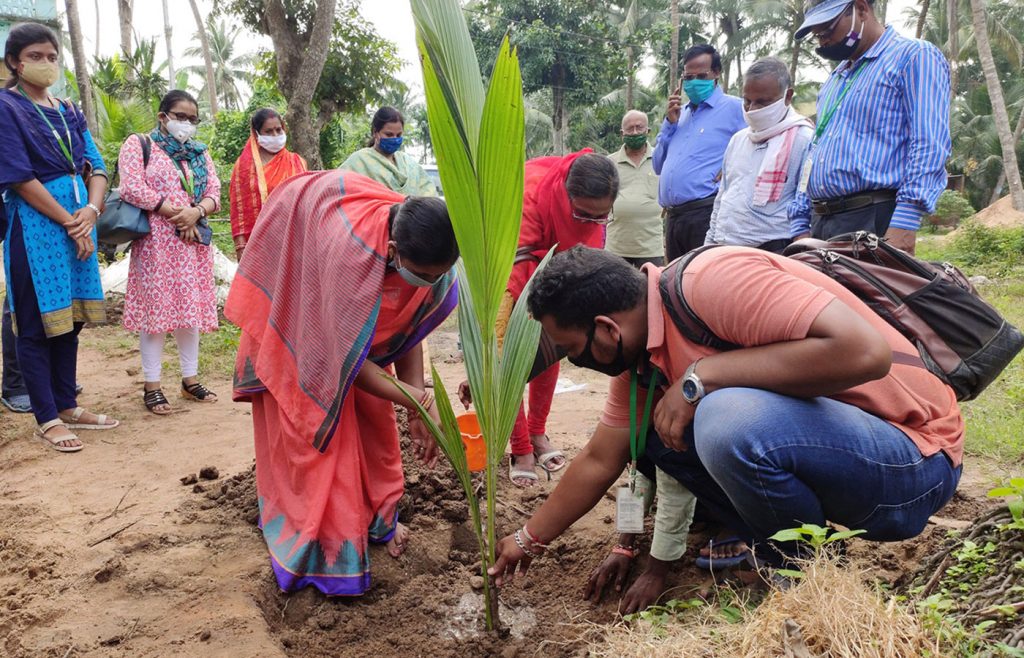 World Coconut Day was observed on 2 September in Odisha to highlight the importance of coconut cultivation for livelihoods in coastal communities. With its partners in the Odisha Livelihood Mission (OLM), ICRISAT marked the occasion with demonstrations of planting, intercropping and multi-cropping coconut. A booklet, ‘Scientific management of coconut’ in Odia language, was also released during the occasion.

As a key partner in the OLM supported by the Government of Odisha, ICRISAT Development Center is undertaking mass scientific planting of coconut saplings by adopting a farmer participatory approach and also enhancing the socio-economic conditions of the rural poor through promotion of sustainable livelihoods. The project is focusing on primary sector livelihoods of rural poor and working intensively in agriculture, non-farm and livestock sectors.

In 2019, Odisha state was battered by cyclone Fani. It has also been affected by the COVID-19 pandemic this year. The state has witnessed significant crops loss and coconut cultivation has been among the most affected.

The recent event emphasized the need to revive coconut and coconut based livelihoods that have been severely affected by the cyclone last year. The event was organized in Biraramachandrapur village, Satybadi Block of Puri District and Jhintisasan village in Khorda district.

Apart from focusing on the restoration of coconut plantations in Odisha, ICRISAT Development Centre has been extensively performing soil test-based nutrient application for enhancing agricultural productivity across the state’s four districts – Raygarh, Gajapati, Koraput and Nabarangpur. The MSoil application, which generates QR code based sample ID with coordinates by capturing details of farmer and the farm including cropping patterns and source of irrigation, has been used to sample 15,000 samples till date.

“This year’s theme has been ‘Invest in Coconut to Save the World’. Coconut plays an important role in Indian festivities, culinary preparations, as a thirst quencher and in the handicraft industry. The livelihoods in Puri and Khordha districts are predominantly supported by coconut plants. These districts have seen extensive damage to coconut plants due to Fani cyclone. OLM helps farmers to replace the dead plants with new saplings planted while following scientific methods and encourages coconut based cropping systems in the pilots,” said Dr Sreenath Dixit, Head, ICRISAT Development Centre.