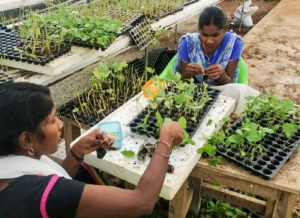 More than 400 vegetable producers in India’s Andhra Pradesh state have taken to cultivating grafted vegetables in an attempt to double their incomes through increased yields. Farmers are reporting around 30-50% increase in yields from use of grafted varieties over traditional varieties.

The farmers, from villages around Kuppam town of Chitoor district, are being provided grafted seedlings as part of an ICRISAT-led project, ‘Doubling farmers’ income through grafted vegetable seedlings in Andhra Pradesh, India’. At a Centre of Excellence in Kuppam, from where the project is being coordinated, farmers are trained in the basics of managing grafted vegetables like tomato, capsicum, chili, bitter gourd, cucumber and snake gourd. Mr Chowdappa, a farmer from Ramkuppam village said he took to cultivating bottle gourd (grafted variety). Despite bad weather conditions in November last year, he noticed that the crop was vibrant and better than the local variety. He harvested 20 tons per 0.4 hectare (one acre), up from 15 tons that older varieties gave.

Another farmer, Mr Mohan Reddy from Chowdepalli village, has been growing grafted tomato on 0.4 hectare land. He is set to harvest 35-40 tones, against 30 tons that non-grafted varieties yield. Mr Reddy says he will continue grafting.

The project aims to benefit 1,200 farmers during its course. Early successes in the project prompted a senior government representative to call for its replication in all the districts of Andhra Pradesh.

Grafting is a horticultural technique where tissues of two plants are joined to continue their growth as a single plant. The upper part of the grafted plant is called ‘scion’ while the lower part is called ‘rootstock’. Grafting is beneficial to tackle biotic and abiotic stresses by increasing the plant vigor, yield and quality in different crops. It also enables vigorous rootstock that provides the plant with greater strength in comparison to a non-grafted plant. Although grafting is quite popular in fruit trees like mango, cashew etc, it involves different techniques when comes to vegetables like tomato, brinjal, chilies etc. The technique being employed in vegetables was developed by the World Vegetable Center.

“I am extremely happy to see the research outputs. The project now needs to be scaled up to all the 13 districts in Andhra Pradesh,” said Mr Chiranjiv Choudhary, Commissioner of Horticulture for Andhra Pradesh Government, at a recently held review meeting organized by ICRISAT Development Center.

“The aim of the PPP is to scale-up at cost effective rates and create entrepreneurs,” he added.

The Government of Andhra Pradesh, YSR Horticulture University and ICRISAT are technically supporting entrepreneurs with cutting edge research and technical advice. The project aims to train 1,200 farmers during its course.

The initiative has been taken up in collaboration with Department of Horticulture, Andhra Pradesh, and Heirloom Seedlings and Plants Pvt. Ltd.

“We co-developed the grafting technology with ICRISAT. All our root systems are drought, salinity, heat and disease tolerant, resulting from 12 years of research. Around 18 grafted vegetable varieties have been developed. We are now in the process of starting similar projects in Maharashtra and Odisha with ICRISAT Development Center,” said Mr Krishna Kishore, Head of Operations, Heirloom Seedlings. Mr Kishore was trained in the grafting technique at World Vegetable Center in Taiwan before scaling up the technology.

“IDC provides technical support and training to the farmers on the practice of packages to be used to grow the grafted seedlings, along with scaling up and developing the technology,” said Dr Sreenath Dixit, Head, IDC. “In this initiative, the Government of Andhra Pradesh, YSR Horticulture University and ICRISAT are technically supporting entrepreneurs with cutting edge research and technical advice.”