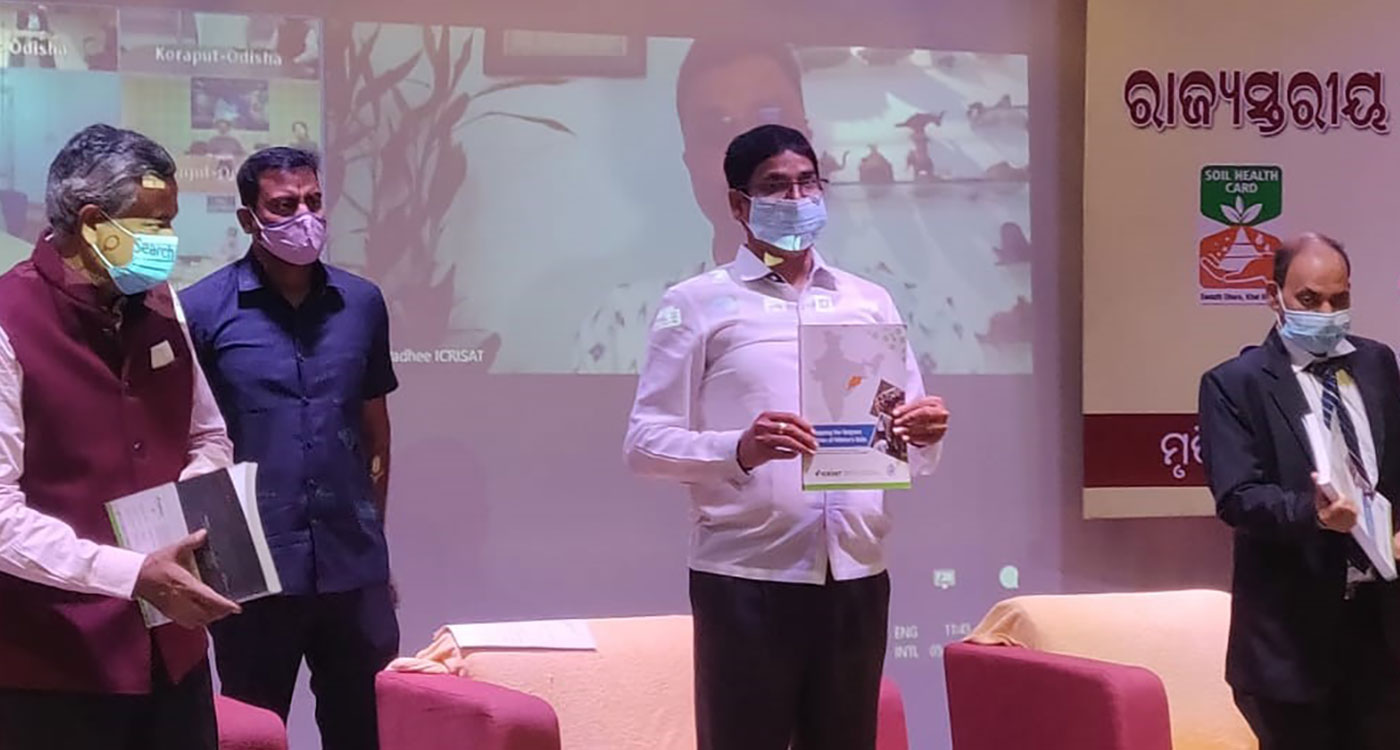 The soil movement started in the Indian state of Odisha two-and-half years ago through the ICRISAT-led Bhoochetana project crossed an important milestone with the launch of a soil atlas and two modern soil testing laboratories of international standard. Dr Arun Kumar Sahoo, the State Minister of Agriculture and Farmers’ Empowerment, did the honors virtually.

In keeping with the theme of this year’s World Soil Day – ‘Keep soil alive, protect soil biodiversity’, Dr Sahoo, speaking in Odia, drew attention to the Indian ethos of referring to the earth as ‘mother’ – the progenitor of life and respect towards all living creatures. He gave examples from rural traditions to illustrate the respect to mother earth. He spoke at length on the opportunities and challenges in sustainable management of soil and the various initiatives taken by the government.

Dr Jacqueline Hughes, Director General, ICRISAT, congratulated the state leadership and expressed happiness at the progress made. Referring to Dr Pawan Kumar Agarwal, Vice-Chancellor, OUAT, and his thoughts on nano fertilization, pesticide application and use of robotics and artificial intelligence on precision farms, Dr Hughes said that new technologies have a huge role to play in future farming and the modern soil labs are a step in that direction, equipping the state to meet international standards. She emphasized on the quantum of work done in all the 30 districts in the state. More than 40,000 samples were analyzed based on which Soil Health Cards were given to farmers, development of Soil Health Maps , publication of the Soil Atlas, distribution of Tablets and the two state soil labs, one each at Bhubaneswar and Sambalpur upgraded with state-of-the-art equipment and trained staff.

Participating in the discussions, Dr Arabinda Kumar Padhee, Director, Country Relations, ICRISAT, commended on the impressive progress made by Odisha in the agriculture sector, nearly doubling its agricultural GDP in real terms between 2000-01 and 2016-17, clocking an annual growth rate of about 4.5 percent against the national average of 3.1 percent. Whilst soil nutrients are important, soil carbon is equally critical and it is important to sustain soil biodiversity, he said. Referring to ICRISAT’s expertise in improving soil nutrition by intercropping with legumes, he said that growing short-duration pulses in rice fallows and the many such techniques not only raise the productivity of pulses but also the soil nutrient profile. He spoke of the Odisha Millets Mission and said that it was a successful example with the potential to scale out to other crops. ICRISAT is ready to partner with the Government of Odisha for science-led agricultural development, Dr Padhee said.

Talking of the way forward, Dr Sreenath Dixit, Head of ICRISAT Development Center stressed on the need for policy interventions to bridge the value chain gap to improve farmers’ access to fertilizers and strategize on acid soil amendment as such soils restrict plant nutrient uptake. He said that farmers who have followed the soil health recommendations had seen a yield increase in the range of 20-60% and these benefits need to be sustained.