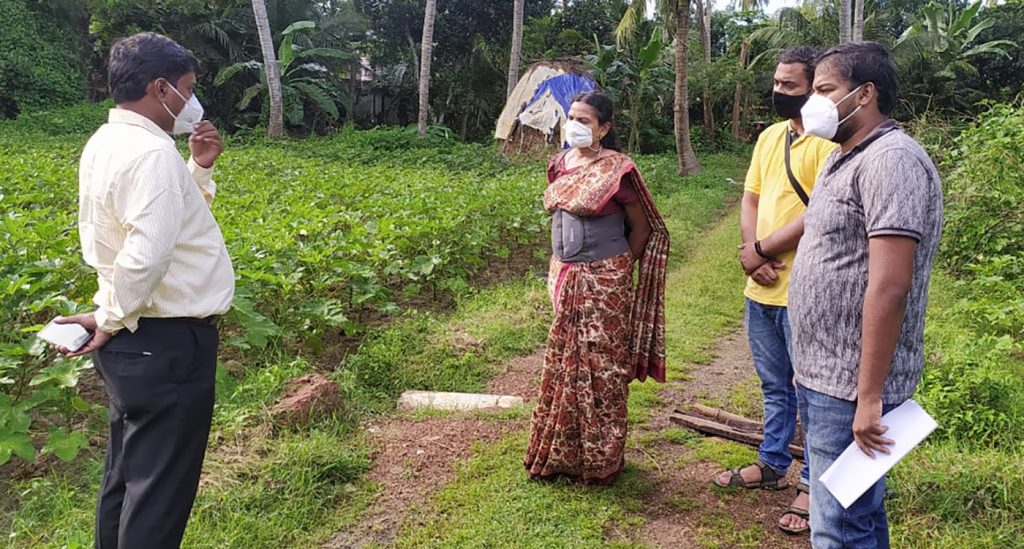 One of the ways in which ICRISAT is helping smallholder and marginal farmers in Odisha, India, is through collaboration with the Odisha Livelihoods Mission (OLM), to restore and improve livelihoods in six districts of the state. Part of this effort is the revival of coconut plantations and dependent livelihoods in Puri and Khorda districts, as well as the transfer of agricultural technologies to tribal farmers in the other four districts, to increase productivity and incomes. The ICRISAT-OLM team released soil health cards to farmers. These soil health cards give the information of soil nutrient status for 13 nutrients and recommendations for fertilizer application for different crops in coconut-based cropping systems.

Every year, 2 September is celebrated as World Coconut Day. This year, the theme was “Building a safe, inclusive, resilient and sustainable coconut community amid the Covid-19 pandemic and beyond”. Like last year, the ICRISAT-OLM team celebrated the day in the Balipatna block of Khorda, and Satyabadi and Pipili blocks of Puri district. Farmers from 15 villages attended the program in their respective Block Development Offices.

Speaking at the event, Dr PK Mishra, Consultant, ICRISAT Development Center (IDC), explained how ICRISAT and OLM started this project after several regions of Odisha state were devastated by the cyclone Fani in 2019. He also said that, in the near future, ICRISAT would also take up coconut plantation in collaboration with the Mahatma Gandhi National Rural Employment Guarantee Scheme (MGNREGS) in Balipatana and Balianta blocks.

“We’ve started a multistoried cropping system to strengthen the financial background of farmers. Its success will attract other farmers of the area,” said Dr Gajanan Sawargaonkar, Senior Scientist, IDC. “The success of our programs is largely due to the active contribution of the Block Development Officer, District Project Manager and Mission Shakti officials.”

“We’re going to conduct a market study for sale of harvest in order to support better prices for the products. ICRISAT will shortly start exposure visits and training sessions to add knowledge on coconut plantation, marketing, and other activities,” said Dr Gajanan.

Mr Bibek Ranjan Behuria, District Project Manager, appreciated the introduction of the dwarf variety of coconut by ICRISAT. He advised maintaining the proper spacing of 25 feet to save the plants from diseases and pest/rodent attacks. “While taking up coconut planting, farmers should consider the suitability of the field from all points of view, i.e., waterlogging, irrigation availability, soil type and depth, etc.,” he said. Asking the farmers to take ownership of the plants, he also requested the beneficiaries and the Sarpanchs to give full support for the success of this program.

The ICRISAT-OLM project “Sustainable improvement of rural livelihoods and restoration of coconut-based livelihoods through specific science-based interventions” is operational in six districts of Odisha – Puri, Khorda, Koraput, Gajapati, Rayagada, and Nabarangpur. The convergence of OLM’s coconut plantation program and MGNREGS will focus on the primary sector of the livelihoods of rural poor and work intensively in agriculture, non-agriculture and livestock sectors.