The India CSR Network has awarded Mahindra & Mahindra Limited (M&M) for its watershed development efforts in India’s Telangana state. The efforts involved creating 51 water harvesting structures in Buchinelli village over three years that led to harvesting 137,000 m3 rainwater every year, benefitting around 150 farmers. Water harvesting with other initiatives like introduction of high-yielding crops yielded up to 40% higher productivity. 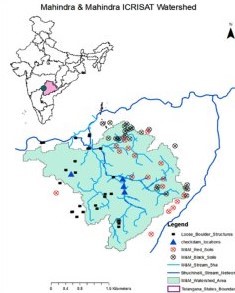 “We thank India CSR for recognizing us,” Dr Nune said while acknowledging the recognition. “This collaboration addresses several issues including declining groundwater levels, surface water availability, declining soil quality, low crop yields and malnutrition, particularly among women and children. Through science-based interventions, we are showing farmers how they can harvest rainwater during monsoon and use it effectively in the dry season without degrading existing groundwater resources.”

“Many people in Buchinelli village work in the Mahindra & Mahindra factory located just across the village. It is laudable that the sense of giving back to the village by M&M has transformed the village. This is the true spirit of CSR,” Dr Sreenath Dixit, Head, IDC, said.