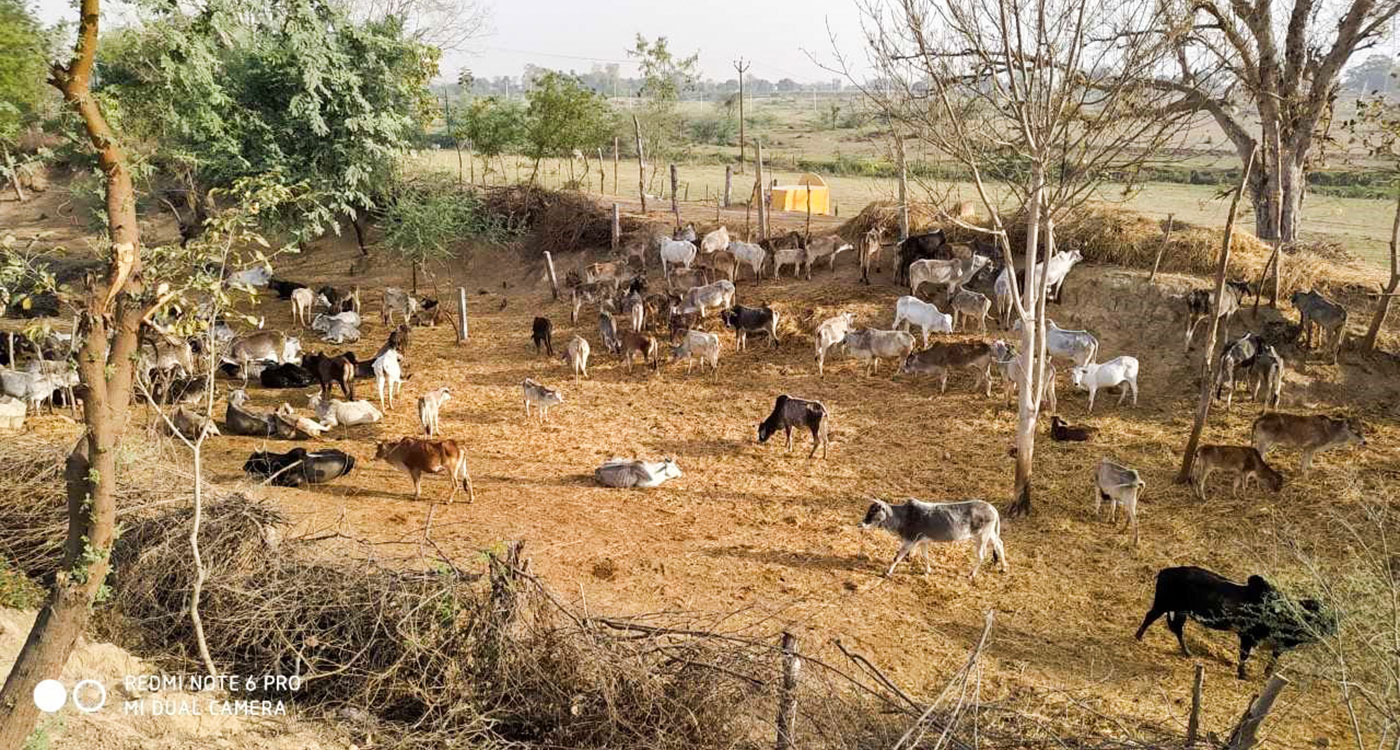 Fodder shortage in rain-scarce region of Bundelkhand in Uttar Pradesh forces farmers to let their cattle loose to graze on what is available in the fields. Photo: ICRISAT.

A series of initiatives, including increasing rainfed fodder production and rapid livestock pregnancy diagnosis, have been taken this monsoon in India’s Uttar Pradesh to prevent cattle from turning into pests.

Fodder shortage in the rain-scarce region of Bundelkhand in the north Indian state forces farmers to let their cattle loose to graze on what is available in the fields, starting April. This practice is called Anna Pratha. Bountiful rains can ensure availability of water for fodder cultivation but changing climate is unlikely to allow such guarantees. This kharif (monsoon) the Doubling Farmers’ Income project in the region has put the spotlight on fodder production interventions in all the seven districts of Bundelkhand. Farmers are being encouraged to cultivate legumes, non-legumes and fodder trees in their fields to meet livestock nutritional requirements.

A similar partnership between the the Indian Council of Agricultural Research (ICAR)-Central Agroforestry Research Institute (CAFRI) and ICRISAT in developing the watershed of Parasai-Sindh in Jhansi, which is in Bundelkhand, led to an increase of 93% in fodder production post 2016; in 2011 Bundelkhand needed 10,163,000 tons of dry fodder but had just over half of that. With improvements in livestock productivity, the buffalo population in Jhansi increased from 900 to 1300, with gains in milk yield of 2 liters per day per animal. The watershed was developed mainly through water harvesting, introduction of improved crops and improvement in agricultural practices.

Under the current efforts, ICRISAT, with the Indian Council of Agricultural Research (ICAR)-Central Agroforestry Research Institute, is stepping up rainwater harvesting efforts through the construction of check dams, farm ponds, renovation of traditional tanks, desilting of water harvesting bodies and large scale field bundings in all seven pilot sites of Bundelkhand region.

Farmers of the region usually leave their fields fallow during kharif and cultivate a rabi (winter) crop using residual moisture. Since landholdings are generally larger in Bundelkhand than in other parts of Uttar Pradesh, farmers make do with one crop, with the region losing ₹ 1,600 crore (Approximately US$ 220 Mn) per year from the lost opportunity, estimates Dr Prakash Rathod, Visiting Scientist, ICRISAT Development Center.

The cattle, straying until October, destroy up to a third of the rainfed crop the region produces. Poor yields imply insufficient crop residue. The animals often move too far away from home and die. The state’s breed improvement programs are affected as there is no control over mating of stray animals. The situation calls for measures to develop resilience in the farm-livestock systems, which account for nearly 96% of the farmers’ income in the region.

Against the backdrop of changes in the state’s livestock marketing policies, the government has initiated solutions including setting up shelters for wandering animals. Research organizations like ICRISAT, engaged to realize the greater objective of doubling farmers’ income, are striving for a change.

ICAR’s Indian Grassland and Fodder Research Institute is helping in fodder management in three districts while Bharatiya Agro-Industrial Foundation is undertaking sorted sexed insemination programs in the region. These inseminations increase the likelihood of female births to increase the value perception of an animal to the farmer.

Farmers are also being provided rapid pregnancy diagnosis facilities, which makes pregnancy detection possible in 21 days as compared to the three or four months it normally takes. This gives the farmer another reason to keep the animal. Further, biogas plants are also being established for effective utilization of urine and dung in the project villages.

Such in-situ and ex-situ water harvesting measures will facilitate groundwater recharge and increase blue and green water availability in project villages. Increased freshwater availability would not only enhance crop intensification but also ensure fodder availability, thereby improving livestock productivity as was seen post the development of Parasai-Sindh watershed project, which was recognized by NITI Aayog as a model worth emulating.