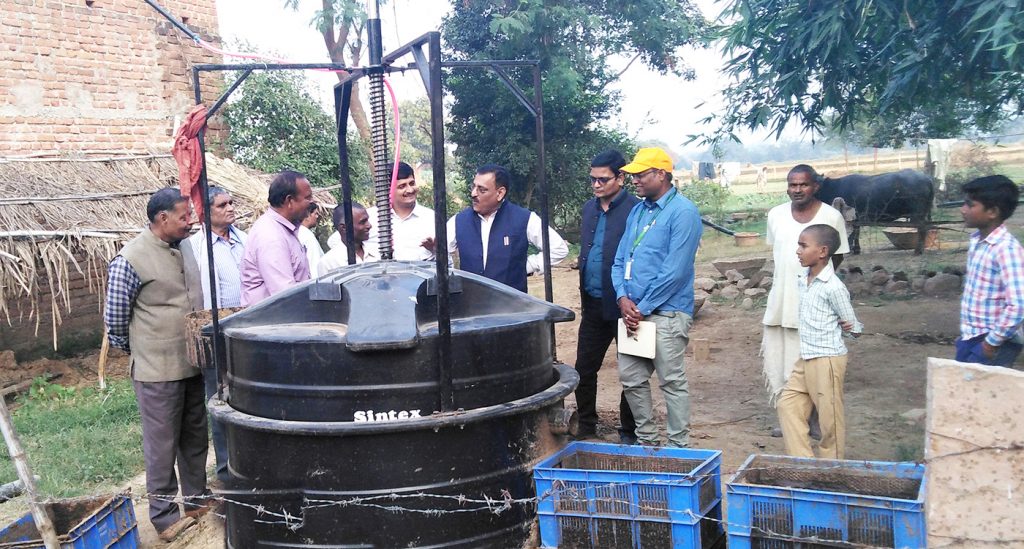 A biogas plant being demonstrated in Chitrakoot district.

The first calf, born in Nathupura village of Mahoba district in the Bundelkhand region of Uttar Pradesh state, is a result of insemination with sexed sorted semen which has a probability of yielding 90% female births. Extended droughts, fodder and water shortage force farmers in Bundelkhand to abstain from rainfed agriculture and let livestock loose to freely graze in summer. The practice is called ‘annapratha’. The grazing continues well into kharif (monsoon) season and is blamed for extensive crop damage. According to various estimates, the area under kharif cultivation is just half of that during rabi. Nearly a quarter of the crop produced during kharif is damaged by the straying cattle.

The state government and its research partners have realized the need for creating more value in livestock to tackle annapratha and reduce the liability of animals to farmers. Consequently, increasing the number of high quality female cattle is being seen as a good solution to provide farmers with livelihood options by way of sale of milk produced by the cows.

In January, BAIF Institute for Sustainable Livelihoods and Development (BISLD) and ICRISAT introduced sexed sorted insemination in Bundelkhand. Sexed semen is produced by sorting male and female chromosomes in the semen. Further, farmers are also being provided with rapid pregnancy diagnosis facilities, which makes pregnancy detection possible in 18-20 days as compared to three or four months it normally takes.

The Nathupura calf is a buffalo of Murrah breed which was birthed by a 9-year-old female. Ms Malti Pateria, the farmer who owns the animals, said that the calf has caught the attention of the village. Ms Pateria’s family earns its livelihood by selling the nine liters of milk that its two buffalos produce every day. Since the birth of the Nathupura calf, seven more female calves were born across the region.

“A farmer has more reasons to rear livestock if sexed sorted insemination services are provided. This technology can produce breeds of choice for the farming community. Around 310 inseminations were carried out by September in Mahoba and Chitrakoot districts of Bundelkhand. Similar interventions have been initiated in all the seven districts of the region under the Doubling Farmers’ Income project from October,” said Dr Prakash Rathod, Visiting Scientist, ICRISAT.

To further increase the value of cattle and buffaloes for farmers, around 20 easy-to-install, portable and compact biogas units are being set up across the region after five such plants installed earlier in Mahoba and Chitrakoot districts provided multiple benefits. These include free cooking fuel, freeing women from drudgery of collecting firewood, and preventing exposure of a family, primarily that of women, to hazards of firewood pollution. The slurry left behind after digestion of dung in the unit can be used as manure, Dr Rathod added.